US Navy CPO James Bob Easom (jeasom75@gmail.com) founded World of Self Defense in Minneapolis while stationed at the Twin Cities (MN) Naval Air Station. He had black belt ranking in Kodenkan Karate / Okazaki Danzan-Ryu Ju-Jitsu under professor Bill Beach, and in Kodokan Judo thru the Armed Forces Judo Association.

James Bob Easom helped Bill Beach organize the Kodenkan Karate Association in the 1960s, and served as Technical Director for that organization

When the NAS Twin Cities was decommisioned, he was relocated by the Navy, and continued teaching martial arts at his subsequent US Navy duty locations; when in California, he started the American Combat Karate Academy, with branch schools in Oxnard and Camarillo, and he later achieved advanced ranking in Judo under Shihan Karl Geis in Texas.

James Bob Easom is now retired from the US Navy and living in Texas. He is still practicing Judo in his 70s

Click on any of the images below to see a few of James Bob Easom's rank certificates, membership cards, etc.

Terry Hamlin and James Bob Easom at the the original World of Self Defense Dojo in Minneapolis, 1960s (click to enlarge) 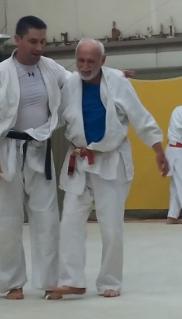